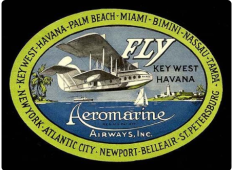 Poking her shining white nose through the smoke and murk that hung over the river opposite the center of Detroit, the Santa Maria, giant flying boat, carrying Detroit passengers from Miami, Fla., sailed twice around Belle Isle Sunday afternoon, and then landed, two hours behind her scheduled time, those on board declaring they had finished “the most wonderful trip in the world.”

The ship was expected about 3 o’clock, but an accident at Belleville, where the craft tore from her moorings Thursday night and smashed a hole in her bottom delayed the travelers near Wyandotte, where the water in the bilge was bailed out. Besides the valve stem, which had to be replaced at Montreal, and the accident at Belleville there was no mishap during the entire trip, the pilot said.

At Wyandotte all the passengers except Police Commissioner Inches left the ship and were transferred to Detroit by automobile, arriving almost in time to see the big flying boat settle into the water. Mr. and Mrs. Howard E. Coffin, Dr. J.M. Robb and Charles F. Redden were the Detroit passengers. J.F. Frankel, a motion picture man, was another on board the entire trip.

The crew, consisting of Captain T.L. Tibbs, pilot; William Mygard, mechanician, and A.J. Balfrey, bowman, said Sunday they had had a splendid trip. The boat was beached near the bathing beach, preparatory to the repair of the bottom.

“We had a wonderful trip from Florida up the coast.” Commissioner Inches said Sunday. “But I cannot begin to describe the beauty and the wonder of the trip from New York to Detroit. The trip up the Hudson was crammed full of beautiful scenes, and then we struck Lakes George and the Champlain. None of us can accurately describe the trip over the Thousand Islands. One might cruise around them for years and not see what we saw in the bright spring sunshine, at a height of about 1,000 feet. It was wonderful.

“Pilot Tibbs sailed us right up the main streets of the little Canadian towns we passed, and we literally climbed the mountains around Montreal. That old town is a wonder from the air.”

From Montreal the boat flew to Niagara Falls, and held a course from the lake up the Niagara river. Just over the rapids in the gorge, although they maintained an altitude of about 1,000 feet, the commissioner said the air was as choppy as though they were in a windstorm. The puffs of wind were caused by the rapids, he believed, and not by the breeze prevailing at the time. The actual flying time from Buffalo to Detroit was 3 hours and 45 minutes.

Every member of the passenger list was enthusiastic over the reception the part received at the cities along the route. At Montreal there was a reception and all the passengers were made members of the Royal Aero club of Canada. At Buffalo the Aero club gave them a reception and made the occasion the opening affair of the season. The travelers were entertained by the Buffalo Yacht club also.

The actual flying time from New York, according to Dr. Inches’s figures, was 15 hours and 45 minutes.

Crowds lined the shore of Belle Isle and the parks and open spaces across from the island for an hour before the expected time of the arrival of the ship. When, at 3:30 o’clock, the whistle of the Detroit Yacht club’s boat announced that an aeroplane was in sight, there was much excitement and crowding to the river bank. The plane was one from Packard field, however, and not the expected namesake of Columbus’s stout little ship.

From 2:30 o’clock, when a telephone message from Dr. Inches, at Fort Wayne, telling E. deB Newman, an officer of the Aeromarine Airways company, that they were near Detroit, until the siren of the fire boat announced it had sighted the ship, there was expectancy, with many telephone calls at the island police station and at the Detroit Yacht club.

Plans to land the passengers at the yacht club were changed at the last minute, and Pilot Tibbs pointed his craft towards the low banks and shallow waters just below the bathing beach. There the anchor, weighting 165 pounds, was taken ashore and the ship pulled onto the sands for repairing.

In landing three times at Wyandotte to look for the expected additions to the passenger list, the plane shipped much water, and it was necessary to bail out the bilge. A.A. Schantz, William E. Metzger and Henry M. Leland were to have been picked up at Wyandotte, but the plan and the passengers failed to make the connection. The prospective passengers came on to Detroit by automobile and welcomed the commissioner when he landed.

Throughout the whole trip, there were 10 different passengers. Admiral Peoples, of the United States Navy, rode in the ship from New York to Plattsburg, and a newspaper woman from New York to Albany. Dr. Inches said she had a “splendid” experience of seasickness high above the Hudson. At Montreal another newspaper woman entered the ship for a short ride. Colonel Gibson, president of the Royal Aero Club of Canada, was a passenger from Toronto to Buffalo. The Coffins and Mr. Redden entered the Santa Maria at Buffalo. Herbert Alden, president of the Timken Axle company, was a passenger for part of the trip.

The Santa Maria has a wing spread of 104 feet from tip to tip and is propelled by two 100-horse power Packard-Liberty motors. There are two cabins in the hold, the forward cabin seating six persons in large, luxurious reclining chairs. The after cabin is fitted up as a smoking room and lounge room. The cabins are finished in mahogany and silver and have as luxurious appointments as one finds in the best limousines.

Promoters of the flight said Sunday that the principal interest and reason for the long flight was to interest civilians in commercial and pleasure aviation. The trip has proved conclusively, they say that such flying is safe and not impracticable. During its service between Havana and Miami the Santa Maria has flown 20,000 miles with little trouble. The accident at Montreal was the first mishap to cause any considerable delay.

Other planes of a similar type have been turned over to the company by the navy for commercial marketing.